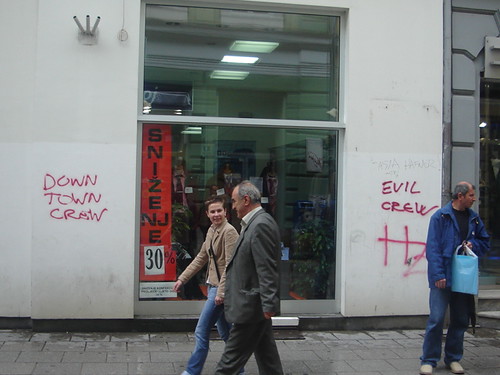 I now have a grand total of 1,810 photos posted to Flickr*. When I start obsessing, I really obsess.

www.flickr.com/photos/hypermobility, if you fancy skiving off this afternoon and looking at hundreds of pictures of the Middle East and the Balkans.

*None of which are pictures of me naked.

Oddly enough, every single plan I'd had for the weekend ended up falling through. On Friday night I ended up going to a random work leaving do in an upsettingly swanky nearby bar, and doing my classic thing where I go "I'm only coming along for a bit!" because I only actually know three of the people there, and then they leave and I randomly befriend other people and stay till closing. At least this time I didn't quite stay till closing, but I stayed late enough that the commuter bus had stopped running, and so I walked from Westminster to Waterloo, watching the silhouettes of the bare trees against the winter orange sky (and realising that maybe I was a little drunk), and flung myself onto a train and then lazily couldn't be bothered to wait at London Bridge for the Catford train and so ended up walking from Forest Hill instead, which involved two new ankle injuries (one on new, previously uninjured ankle; one on tragically wounded ankle) and really I shouldn't be let out of the house, or perhaps only in one of those giant inflatable balls that Kiwis use to roll down hills in. Oh and of course the library book incident, and no they don't seem to have been handed in which makes me very very sad and actually I can't bear to think about the money at this point so I won't.

So then on Saturday I was supposed to have lunch with Garrett but he cancelled due to hangover and then I was supposed to go out in the evening for Justin's belated birthday drinks but by this point my entire leg and lower back was hurting (presumably I am walking funny due to the various ankle debacles) and I just couldn't face Chalk Farm, so stayed in with

chiller and drank cocktails and watched Mrs Henderson Presents and then The Wizard of Oz which I'd never seen before, and now I admit I have that faint sense of failure that I had after Mark finally persuaded me into seeing the bloody Star Wars films. Though I liked The Wizard of Oz a lot better than Star Wars.

And then on Sunday I was supposed to be meeting John for lunch but then he cancelled too! What is wrong with me? Do I smell? Instead we went to the caff and I listed a whole load of stuff on eBay and tried to feel virtuous about saving money that will end up going to SOAS library, I expect. Oh woe. WOE.

Now today I am in work, because that way I get to take an extra day off the week of my book launch, hurrah. But meh, work. I wish someone would give me a whole load of money to make David Attenborough-style documentaries about people; I mean there seems to be this real fascination for nature programmes on one side and things like Big Brother on the other and we could call the documentaries What It's Like There and they'd just be about the way that people live in different places, and the issues that affect them, and I'd be GREAT at presenting them because, well, I just would be and I'm an anthropologist and everything. AND I wish someone would give me a whole load of money to start a British feminist magazine, because that would be fantastic, though it should be possible to do it anyway without a whole load of money. But then how many more money draining vanity projects do I need, other than the book(s) and the PhD? Hm. Oh well.

Too many bad things are happening to my friends at the moment. MAKE IT STOP PLEASE. If you are one of said friends, be aware that I am thinking of you and wishing you well.

It amuses me that my new supervisor's last name is 'Marriage', and there is currently an email from her in my inbox entitled 'proposal'.

Also, spammers seem to have changed tack recently from spouting utter gibberish to actually mocking me for my small wiener (e.e. 'haha boy, why your wiener so small?'). Please stop. I am not a boy, and I bet even if I were, my wiener would be GARGANTUAN.
Collapse